Translation to English of German version done by deepl: On Sunday, August 7, 2022, at about 10:00 am, I started another great cycling adventure for this year: London-Edinburgh-London (LEL) across the most beautiful parts of England and Scotland.

London-Edinburgh-London is a cycling marathon that takes the form of a brevet. This means that each participant determines their own riding style and breaks on the approximately 1,500km route. The time limit to get the certificate was 128 hours.

LEL is considered the British counterpart to Paris-Brest-Paris (PBP) and also takes place every four years (most recently in 2017), two years after and before PBP respectively. From the starting point near London, it goes to Edinburgh, Scotland, and back. It is the longest regularly held cycling marathon recognized as a BRM (Brevet Randonneur Mondiaux). It’s an extreme test of mental and physical toughness! If something goes wrong, it’s up to each individual themselves to use their skills and experience to make it right. If you’re tired, cold or hungry, no one is going to rescue you! But if you make it to the next checkpoint, you can be sure of the full support and attention of the LEL volunteers.

Route and characteristics of the brevet

Actually, LEL holds the attribute „self-supported“. This is true to a certain extent! Along the route there were 13 checkpoints for the 20 stages out and back. At each of these checkpoints you could fill up on water and eat delicious food. There was even massage service at some of the controls. The volunteers were extremely friendly and helpful and tried to provide everyone with everything they needed and motivate them to keep going again, when it was sometimes hard …

The course was very challenging! In the beginning it was a bit flatter, but the headwind was relatively strong on the ride north. Gradually it started to get hilly and there were some climbs – even longer ones – to contend with. It added up to over 14,500 meters of elevation gain along the entire route. I’m used to the elevation gain (it was about the same for the 1,000 miles in Italy), but apparently, especially in Scotland, they try to save road miles by simply making a straight line from the bottom to the top of the hill – regardless of the resulting gradient of often over 15-20%. Would have liked a few more sprockets on my cassette, but had to make do with 30 teeth in the back. That went quite on the thighs … and cost time.

Speaking of time: I documented my passage and break times on the way. There you can also find the exact route from checkpoint to checkpoint.

The efforts on the route were rewarded with beautiful views! The landscape was for the most part very impressive and often I actually stopped to enjoy these impressions. I can imagine that it might have been even more beautiful if the meadows, which were already „burned“ by the past long drought, would have contrasted even better with all the other colors. But even this yellow ground tone had something special! In the Yorkshire area one cycles over hills, which are wrapped in purple by the heather. Really ingenious!

13% rather rough road surface. In the north with many repairs and potholes.
86% asphalt of various grades.
In total only a few kilometers of gravel, pavement, etc.

The route is often very lonely and you don’t always pass through towns, as you know it e.g. from Paris-Brest. One crosses different national parks and is often very lonely in nature – which I personally find beautiful. It is sometimes difficult to get water on the way. Since the checkpoints are not extremely far apart, it was mostly no problem. At the long stages there was either a „Secret Control“ with water point or the helpers were sometimes to fill water with a bus on the roadside! Really well organized!

I didn’t expect it to rain not a single minute during the 122 hours I was on the road. I transported my bike mudguards around the UK for totally nothing! LEL 2017 claimed many „victims“ due to the continuous rain at that time. This time the victims were more due to the very strong heat during the day. It was up to 36°C in the shade. But the nights – especially in Scotland – were quite cool. I wore mostly sleeves, knee warmers and a thin wind vest during the night hours. In 2 nights, however, I had to wear my thermal gilet, the windproof warm rain jacket and long gloves, because it became very damp and cold due to incipient fog. The temperature sank once even on approx. 5°C in the night. In the morning hours it was often foggy and I had the problem that my glasses constantly fogged up and I couldn’t see anything anymore. This cost me some time and even more nerves to clean my optical glasses again and again.

I was not 100% fit beforehand to the race, as the summer flu that was rampant in Vienna at the time also confined me to bed for a few days. I had to skip the 24h-race in Kaindorf, which was also a training module for LEL, and I hadn’t done a longer ride since the beginning of July. Therefore, the plan was to simply see the LEL as a „bike trip“ and good training and to take a sleep breaks of at least 2-3 hours every night.

I am very satisfied with the progress – as far as my physical performance is concerned! On the first day I rode about 300 KM (just under 2,000 meters altitude) relatively easy, which formed a good foundation for my positive performance. The next day I was a bit more ambitious at the beginning and kept up with a somewhat stronger group for a few hours. In the long run, the pace was too fast for me – especially over the hills – and I backed off a bit and completed about 350 km and 4,000 meters of elevation gain with some tough climbs until the next sleep break.

The third day was my suffering day. It went first until Edinburgh quite hilly and then back to the south over the hills, which I already knew from the previous day. The climbs on 2 mountains were – just as I had thought on the departure the day before – much longer and steeper than on the outward journey. There were long passages of 15-20% slope, which I could push only with difficulty. Some parts were just not ridable with my gear ratio and I had to push my bike. After these 2 hills I imagined that it should get better again. I didn’t have the terrain profile in my head anymore and started to get really annoyed that one steep climb after the other followed.

On the stage from Innerleithen to Eskdalemuir I met my guardian angel. A „caddle grid“ (grid in the road to keep cows/sheep out) had a huge hole that I didn’t see in the advanced dusk and I crashed right into it. Because I always shift my weight back a bit on such grids, I avoided a flip that surely would have ended differently. I was even able to catch a fall and only had to change my tube on the front wheel. The rim remained intact! Together with following cyclists, whom I warned immediately, we tried to stuff the hole with material lying around and reported this danger spot to the organization team, which – as I had learned later – made a further securing there. This all took time and there was no place to sleep at the following control point. Therefore I continued to Brampton, where I arrived after I had also lost my way, which cost me about 5 KM, only at 05:30. My mental condition was pretty bad that night and I tortured myself a lot.

I didn’t start again until about 10:00 and that day a switch flipped in my head. I don’t know exactly what the reason was. One main reason was probably that I also activated my headphones that morning and listened to my self-assembled „Ultra Cycling Motivation Playlist“. I just tried to cycle to the beat of the music and it worked really well. I was totally happy that it went so well for hours uphill and on the flat! I felt very strong – even if of course the wattage values were not as high as on the first day. But my head and mind were back in the swing of things and I had fun catching up with cyclists again and again, at times trailing hords of cyclists behind me. The next day from Malton to St. Ives was similar! It was an extremely enjoyable day on the bike for me! As dusk fell, I contemplated my next course. Physically, I probably could have just finished the thing, but having grown so fond of the breaks and also sleeping in the checkpoints, I passed on the night ride and tackled the last 120 the next morning. The route still went through Cambridge and I was able to cross this beautiful city without „crowds“! Great impressions and huge anticipation for the finish!

My nutrition has been all Vespa & OFM based again. With great advice from my coach Peter Defty, there are basically no question marks in the area of nutrition and energy supply for my body. Vespa, the fat metabolism booster makes tapping into my fat reserves for this endurance performance easy and provides me with base energy! For intense stretches, as always, I had planned to use a specific carbohydrate mix (3-4 x 25g carbs per day) for my hydration bottles. However, due to the great food offer at the checkpoints, I changed this plan and enjoyed/tasted small portions of the delicious English food – always spiced up „OFM-style“ with some fat (butter, mayo). I used 1-2 units of my own carb mix actually only because I have some aminos in there too that I didn’t want to miss.

With OFM, Vespa and these „strategic carbs“ I had „good legs“ for whole day long and regenerated extremely well during the short sleep breaks.

Even on Friday evening after the brevet and the following weekend that I spent in London together with my wife and friends, I didn’t feel tired at all – even though we roamed the streets of London all day and evening! Vespa simply works!

Back in Austria, I took a measurement of my body composition. I had lost 3 kg and lowered my body fat by 1.3 percentage points. The muscle mass remained approximately the same, which indicates that for the approx. 25-30,000 calories needed during the brevet, I burned only fat and hardly any muscle mass from my body in addition to the ingested food.

On Friday, August 12, I reached the finish at 11:45 after 122 hours total for 1,550 kilometers and 14,500 meters of altitude. The joy was huge as I was greeted with applause from the helpers, spectators and other cyclists! I felt grateful, satisfied and humble that I had mastered this extreme task and survived so well!

I just learned that about 40% of the participants in the LEL 2022 had to break off the brevet prematurely – for whatever reason. I am all the more pleased that I still felt very fit and fresh after these 5 days and this time my butt also „held“. It just went optimally!

Even though there were many hard and difficult moments for me during the course of the brevet, I could look back on many wonderful hours on the bike! The impressive landscape, many conversations with other cyclists, the long lasting sunsets and sunrises at pleasant temperatures and also the helpfulness and friendliness of the volunteers at each of the checkpoints I will probably not forget so quickly! 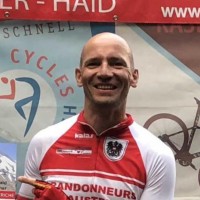